We took the kids into the mountains on Saturday for something to do. Bridal Veil Falls is one of our favorite places. Since it was crowded, we decided to eat at Nuns park, right across the road. 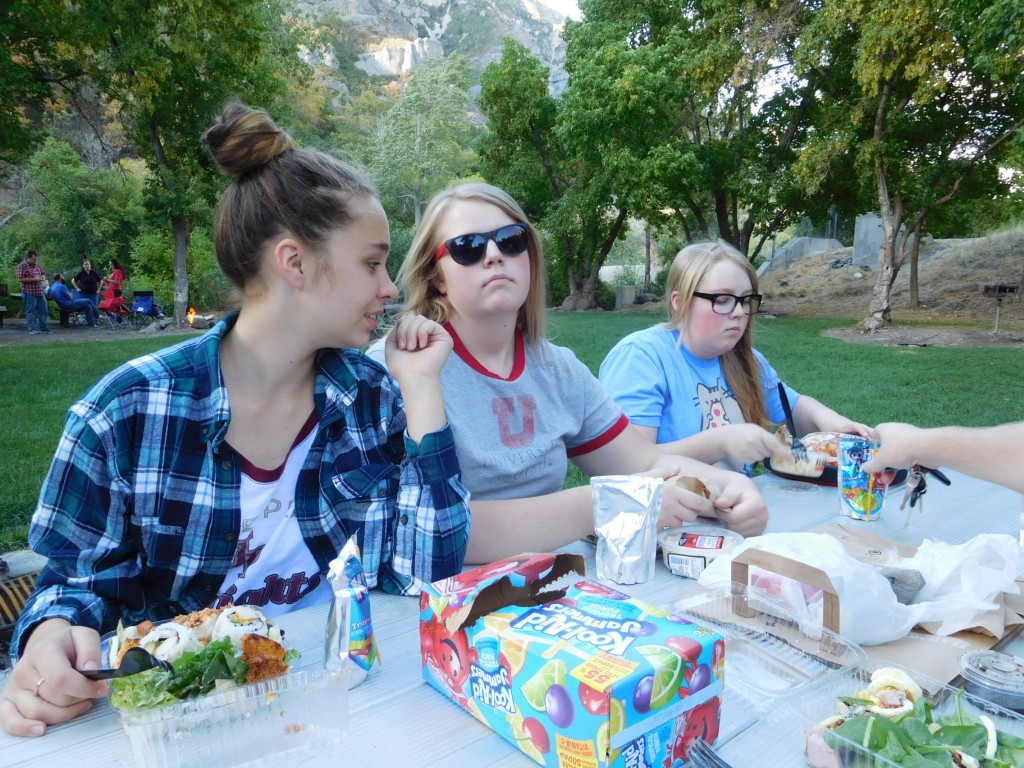 We had stopped at Harmons to grab some food from the salad bar, and the kids got sandwiches and mac and cheese. 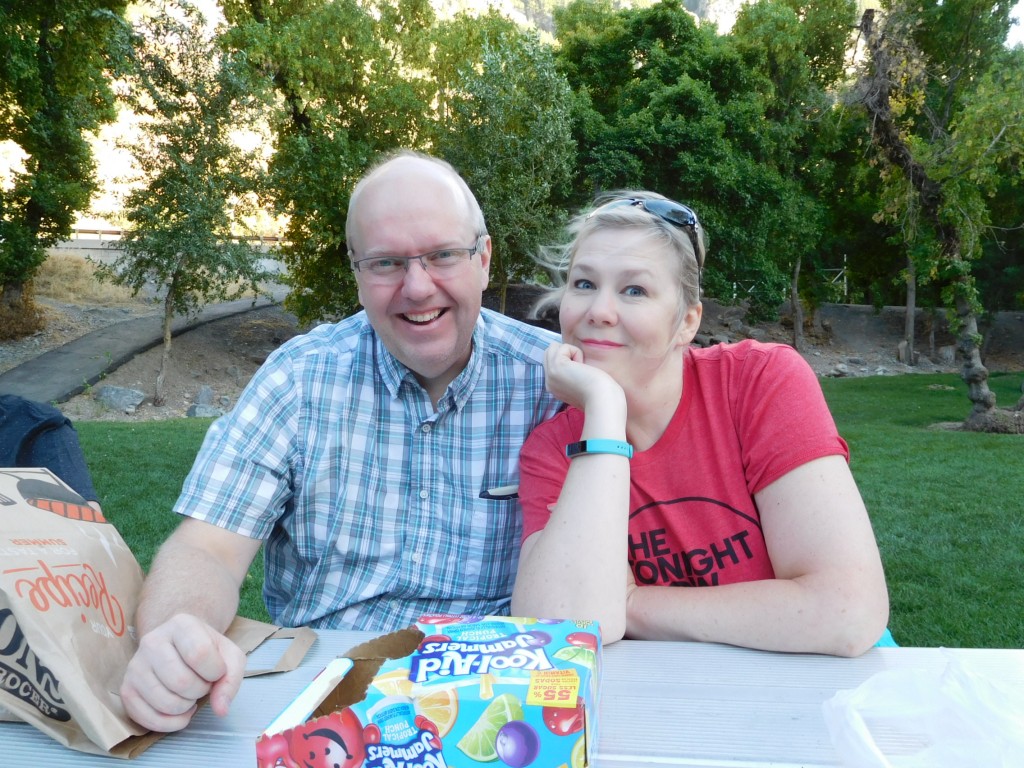 Then we walked over to the falls. It was a lovely night, cooler in the mountains and a bit windy. My three lovely models were happy to pose. 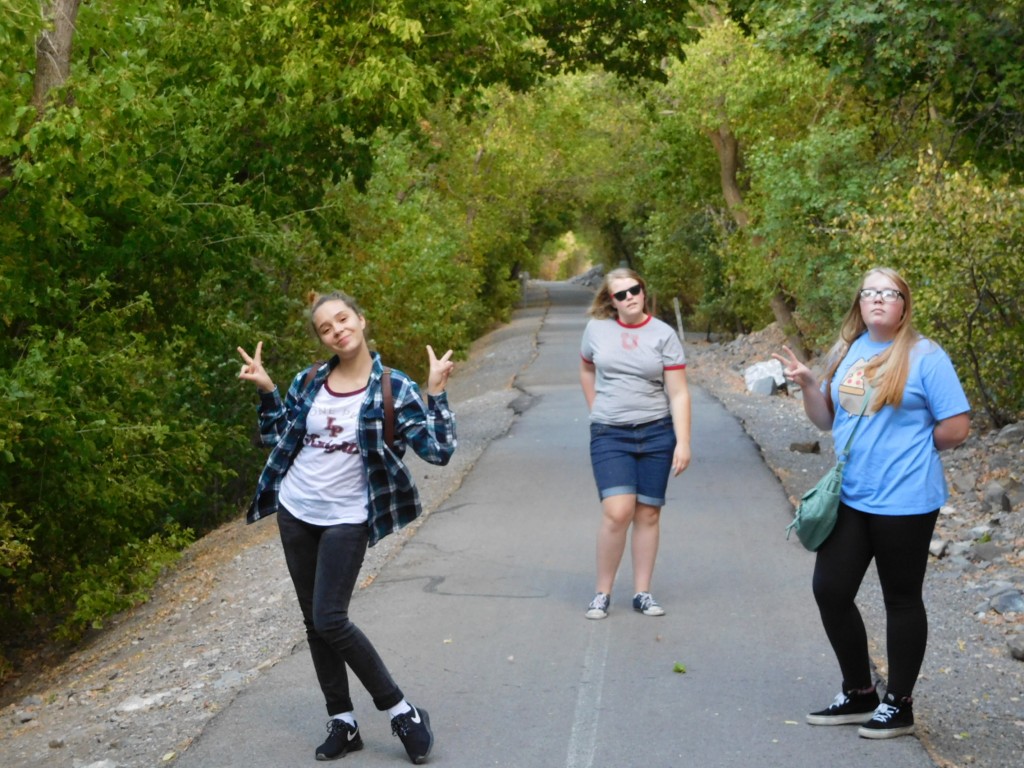 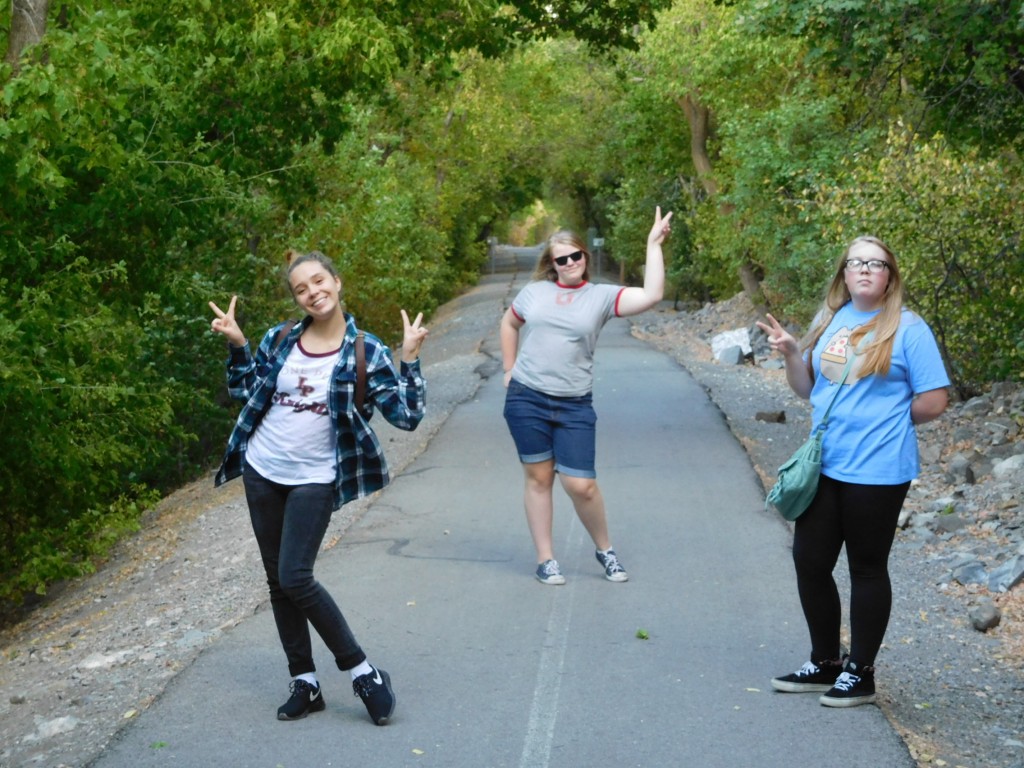 When we got to the falls, it was a little crowded. It’s always crowded there. John and Kate climbed up the falls. 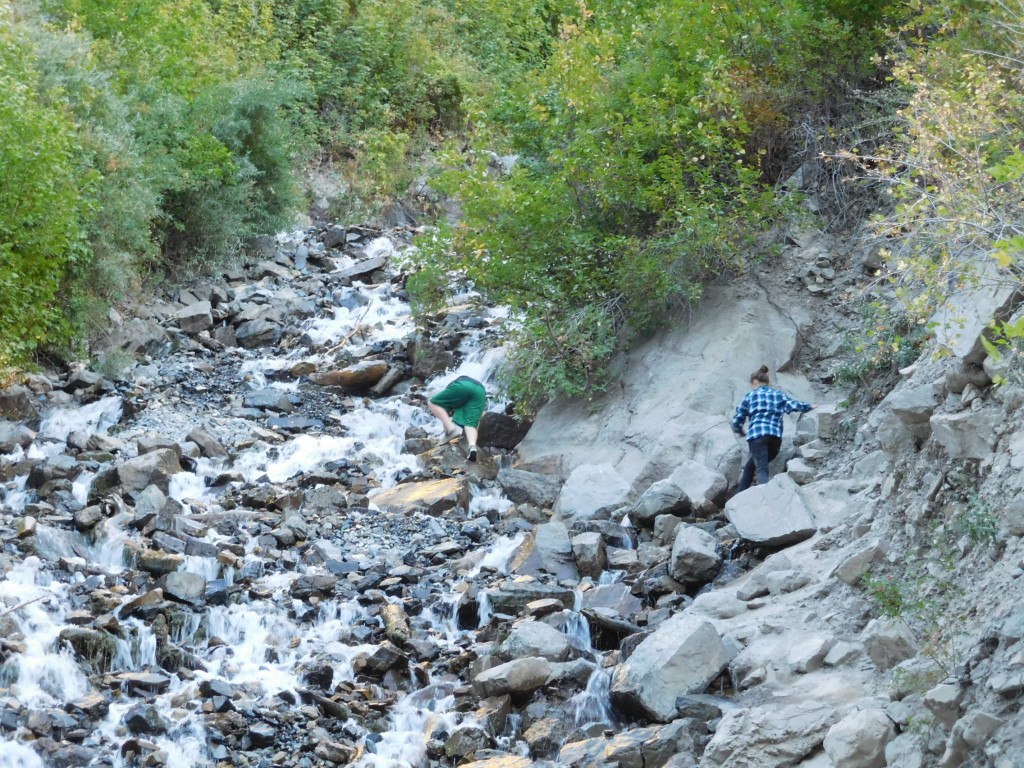 It was so lovely and we enjoyed the night out. When we came home, there were 5 dozen donuts at the house from a boy asking Natalie to Homecoming. Fun times.

Even though I am still the relief society president, I still tried out for plays this summer. I knew I couldn’t do something in the early summer because of the wedding, but I tried out for South Pacific that would run in August. I was even called back for the role of Bloody Mary, and I felt pretty good about that, but no. Didn’t get cast in that show.

Then I auditioned for Beauty and the Beast. There were SO many people at that audition. I was number 45 or something, and was there for 2 hours. All these young theater majors who aspire to play Belle are there. “What part are you auditioning for?” one of them asked me. In my mind I can just imagine her thoughts…’you’re so OLD and FAT. How could you even think of competing with someone young and pretty like me?’ (OK, so I might be exaggerating there a bit)
“Mrs. Potts,” I said.
“Oh. Well, good luck.”

I didn’t even get a call back for that show.

As I prepare for and go to these auditions, I always pray for guidance and help so that I can do my best and that I will feel good about the audition, no matter the outcome. I also leave it in the Lord’s hands and mention that I will understand if I am not supposed to be in this show (because of my calling, etc.), then I will understand. But I still take rejection hard. I especially hate it when I don’t get ANY word from the director. No email saying thank you for trying out, just…..crickets.

I am always up front about my Wednesday night commitments when they ask me to fill out the “any conflicts” part of the audition form. Maybe I shouldn’t be so honest, and just try to get out of stuff later.

This year I have auditioned for 5 different plays. At the last audition, for Nunsense, I mentioned in my prayers that if I weren’t going to be cast in the play, could I please not be called back? If I have to prepare and go to a call back, possibly miss something else, and if I go to a call back, then I get my hopes up and it’s just harder when I don’t get it.

So, when another audition came up, I prepared a song, and I went. I was surprised to see so many people there to try out for a children’s show that rehearses and performs during the day. Again, it’s a bunch of young 20 something theater majors, and then there’s me.

There ARE parts for middle aged women, you know. Few parts. I did see one person I knew who was also auditioning. I met him in my very first community theater play, Seussical the Musical. That was 9-10 years ago.

As we were all sitting around, trying to not let nerves overwhelm us so we can’t sing, I thought of this little girl and her “pep talk.”

I may need to do that a few times. Maybe not stand on the counter, but just the positive self talk is a plus. I can do anything! I can do anything great! Is that how we talk to ourselves in the morning? Maybe it should be.

After a few minutes it was my turn to go in. It’s two directors and an accompanist in a room. I plug in my phone, my music starts, and I sing my song. (A little bit in Love from Wonderfultown, in case you are wondering.) I’m a little nervous, so it’s not the best I’ve ever sung it, but I get through. Then, the director says, “That was nice, but could you sing it again, but this time…. sing it like you are in love with someone who doesn’t love you back, and you have to try to convince him with this song that you love him.”

My phone picks this moment to turn itself off, and is in the process of rebooting. Whoops. Let me just restart my phone. Small talk, carry on, go ahead and eat your food, sorry about this, awkward, more awkward, find the music app, find the song, “Actually, I meant for my phone to do that so I could just stall for a minute,” I said, then push play and sing it again.

So, NOW, since I have permission to throw myself into the song and I’m not worried about notes, I really ham it up and commit to the idea of a lovesick woman who has a hopeless crush. It was over the top, and it was fun. They were laughing, and I felt good about it.

That was it, and I left.

Miraculously, I checked my email the next day to see an email from the stage manager. That’s a good sign. It said,
Good Morning! Thank you so much for auditioning for “Alice in Wonderland” we would like to have you join us in our work shop and production as the Queen of Hearts.

What? Queen of Hearts? Are you serious?! I’m so excited! The show doesn’t run until February, with rehearsals starting in January, but it’s a new musical, so we need to “workshop” it this month for a week and then do a preview show at the end of the week. I don’t really know what that means, but I’ll find out soon.

I’m just so excited that I get to do a play again!
And who wouldn’t want to play the queen?