On a previous cruise, we went to Cozumel, Mexico. Let’s just say that nothing about that day was a good experience. From being sick, kids having diarrhea, exhausted from throwing up all day the day before, it was just doomed from the start. The kicker, though, was that we hadn’t brought enough cash, and ended up stiffing the braid lady because we thought it was cheaper than it was. A LOT cheaper. Anyway, it’s left a bad impression of Cozumel.

But, this is many years later, and we weren’t planning on being sick or having hair braided, and we planned ahead and brought cash. Our friends really wanted to do a jeep tour of the island. Sounded fun. Four of us in a jeep, and we get to drive it ourselves? We signed ourselves up.

When we got off the boat and found our group, it was a 10 minute walk through town to the jeep rental place. Imagine our surprise when they loaded us into a NEW loaded jeep. It was like a test drive!

We took off in a caravan, with a guide in front of us and in the back. We drove about 20 minutes through town, then turned off onto less traveled road through the jungle. Ryan was driving, and he was so excited!

The road got more rutted and rocky as we went deeper into the jungle. Some of it was sandy,some of it was rocky, and we even drove through a “puddle” that was at least a foot deep.

Ryan was so sad when we stopped to see the Mayan ruin.

As far as ruins go, it was not one of the major ones. We had kind of expected it to be like Chichanitza or Talum. Smaller. But still interesting.

We learned some of the history of what kind of building would have been here, and that it was like a hurricane warning station with doors and windows that would make whistle when the wind blew through it to alert the people that a hurricane was coming.

But they had no problem with us climbing on the ruin and taking pictures.

After visiting the ruins, we drove a bit more, then stopped on a beach, where there were umbrellas all set up and people were making lunch. It was unreal! So beautiful!

Sitting on the beach, playing in the sand, listening to the waves. It was truly wonderful. AND they fed us tacos! So amazing!

When we had to leave that place, we at least got to drive the jeep again. This time Gardner drove back, and I think he took it a little slower than Ryan, but it was still bumpy. After we returned the jeep we were back near the ship, but decided to do a little shopping. It was then that I discovered that I had no driver’s license. Somewhere between entering the jeeps and exiting the jeeps, I had lost my license. Whoops. Probably bounced out.

I tried not to worry about the consequence of not having my ID while we shopped. It was raining by then.

The worst case scenario would be that Ryan would have to go and get my passport to let me get back on the ship.

But no one even asked for my ID besides my ship card when we got back on. There were two Royal Caribbean ships parked there when we came back. Ours is the one on the right.

So, all in all, I would say this Cozumel trip was MUCH better than our first experience. Who knows, maybe we’ll go again someday.

And if you’re a fan of shaky Jeep videos:

There is SO much I want to tell you about our cruise. I can’t put down every detail, but I must share some of my favorite things!

In Roatan, which is an island of Honduras, we went on a zip line excursion. 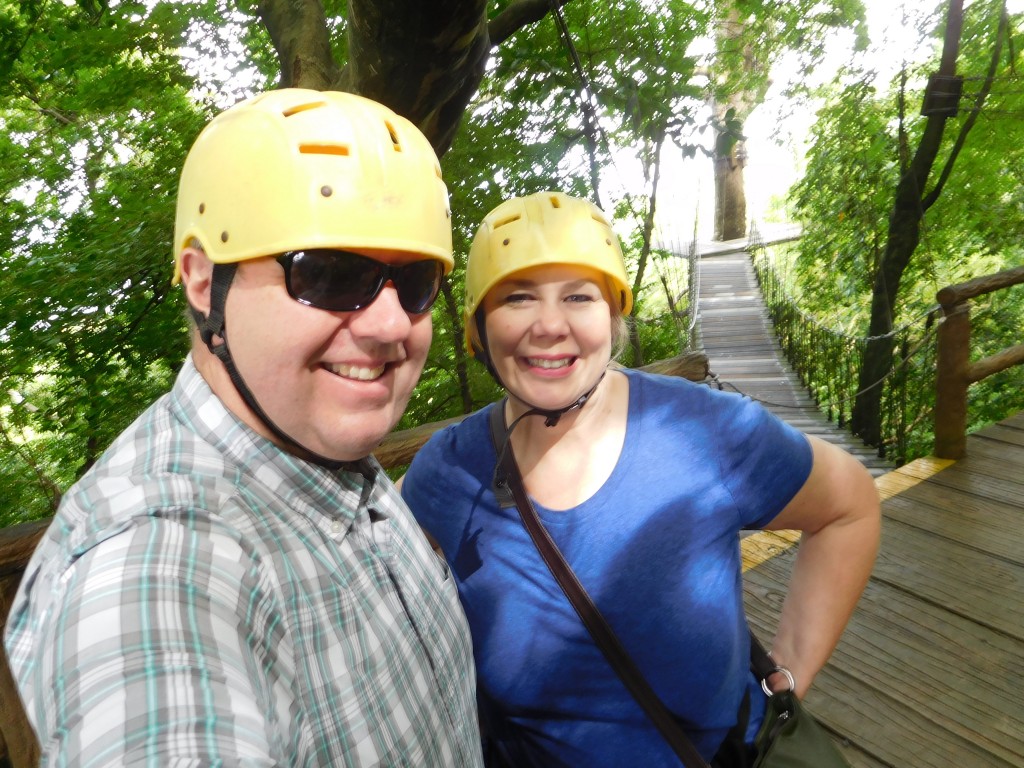 It was 12 different platforms. You hook on, and go. Fun! I was a little nervous, but really, there’s nothing to it, and you are safe. We laughed a lot, and enjoyed joking with the others in our group. 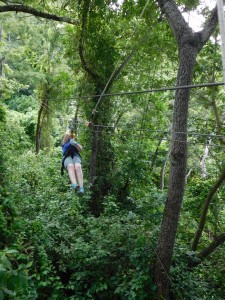 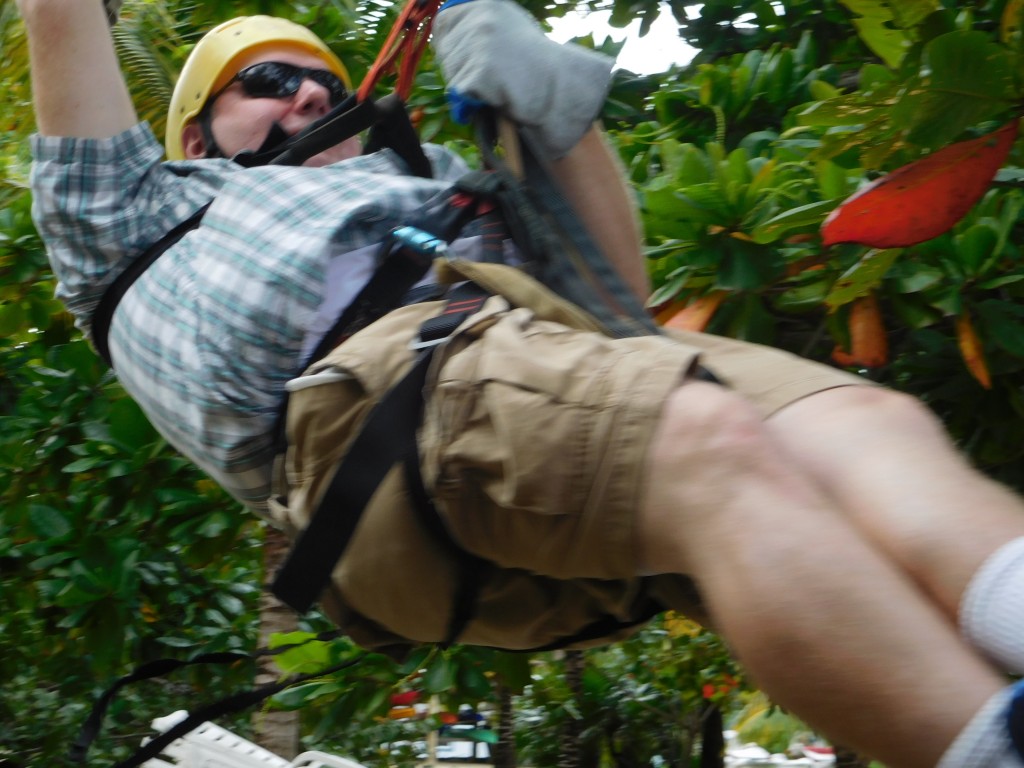 When we made it through the jungle and down to sea level, we were at the Gumbalimba park. Our guide took us through, taught us a bit of the history of the island (pirates!) and then we crossed the bridge. 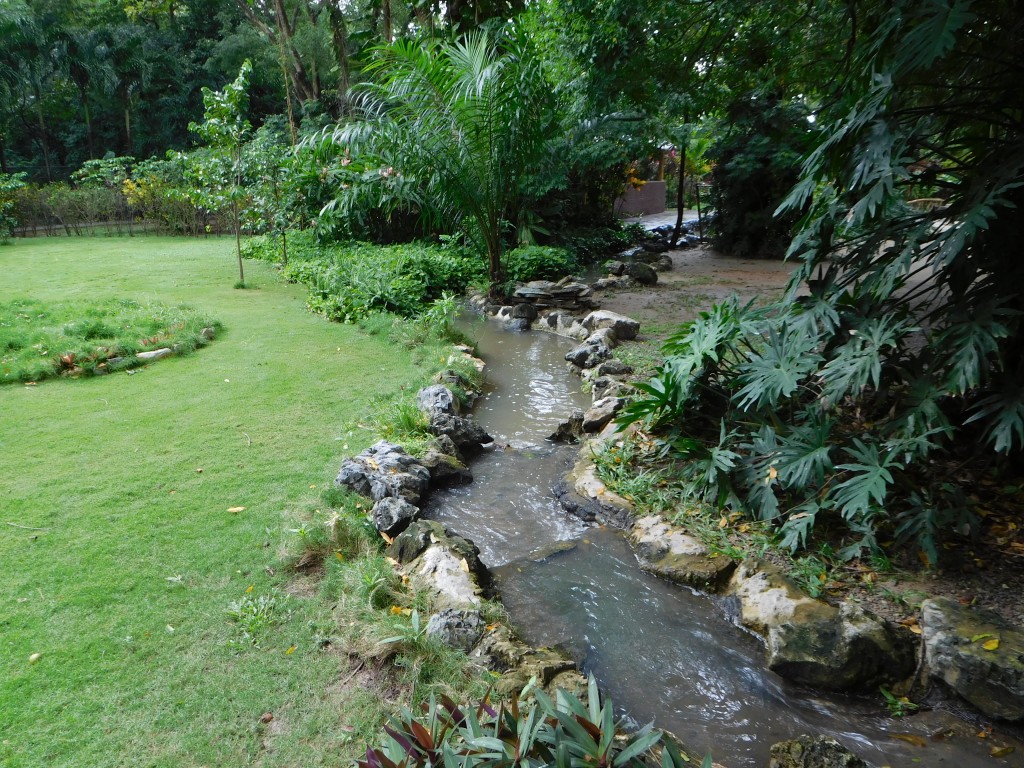 It was like being in an Indiana Jones movie! 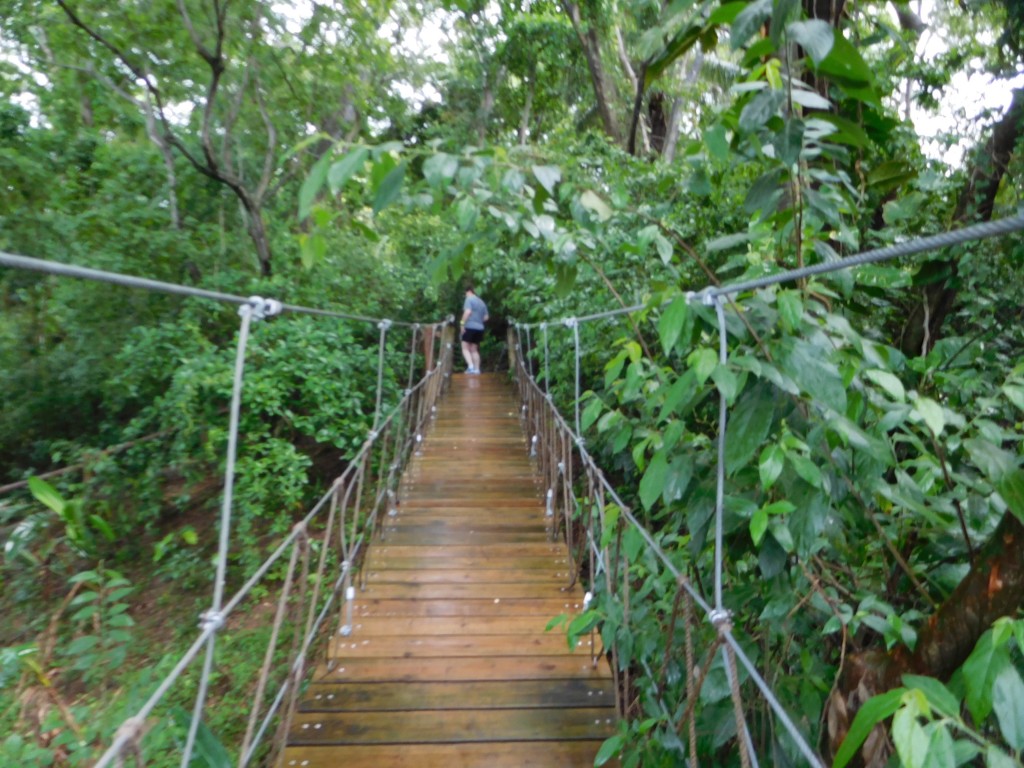 There were many birds, but the most impressive were the macaws! They even had one bird we could hold. 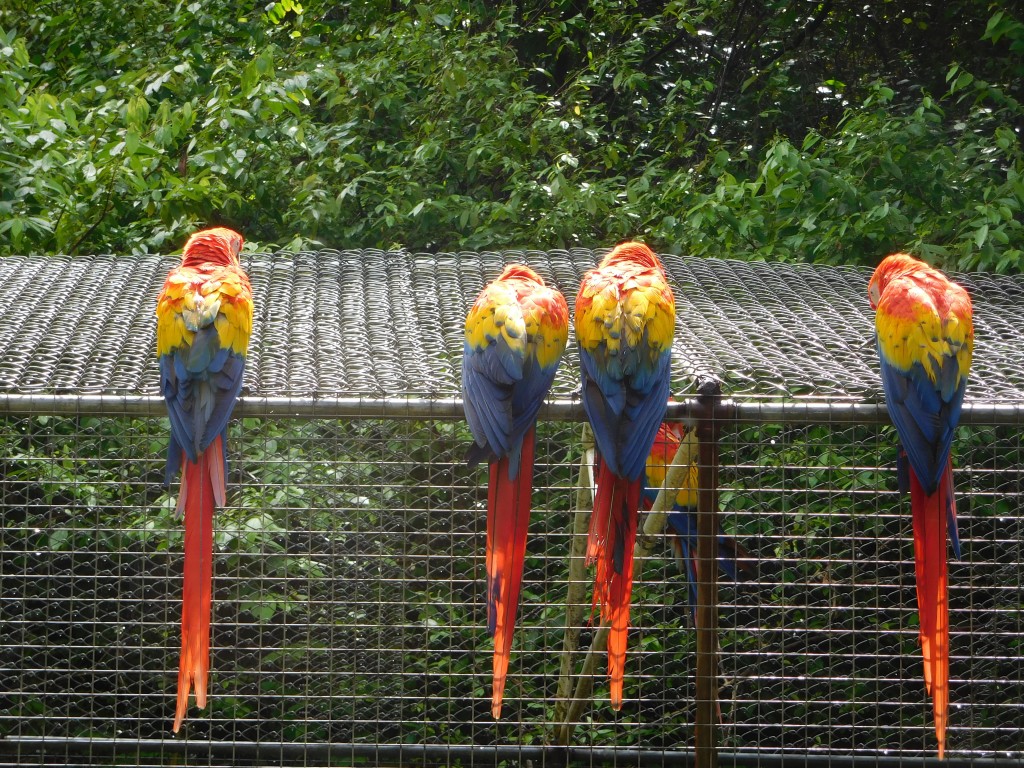 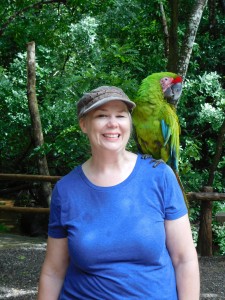 He bit off a button on Ryan’s shirt! 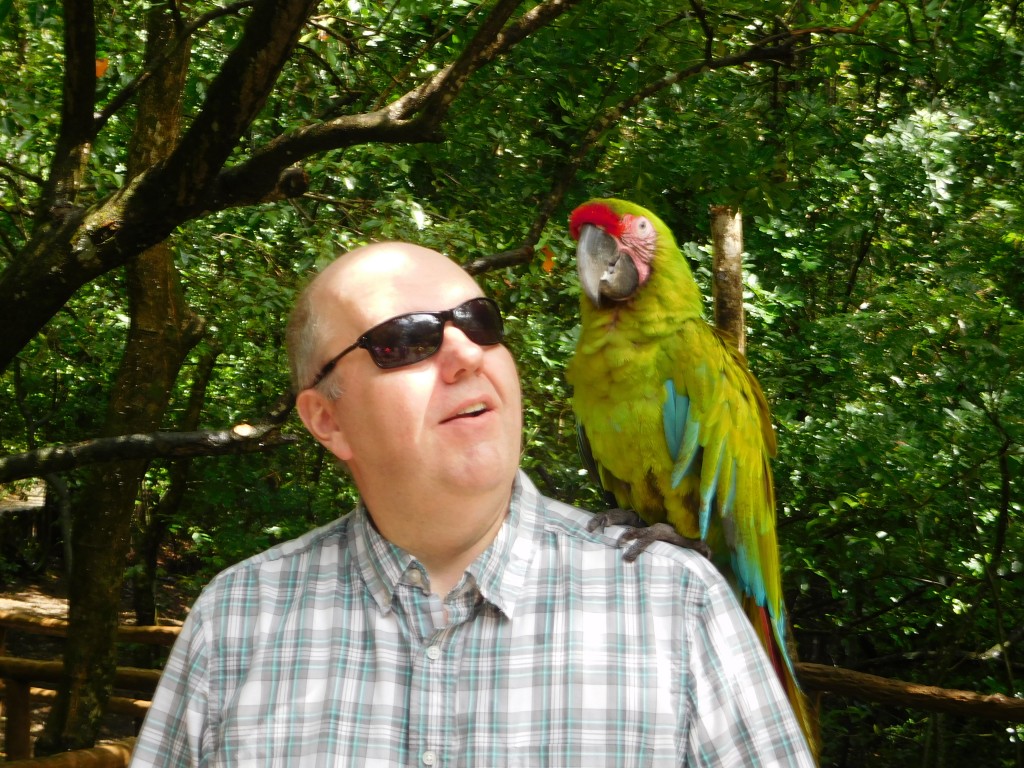 Then we went on to see the monkeys. Monkeys are not native to the island, but they have them in this park. They told us not to yell or jump if a monkey jumped onto us, and if the monkey took something, just let him have it. Eventually they would get bored with it and put it down. We weren’t allowed to bring bags or purses into the park for this reason. 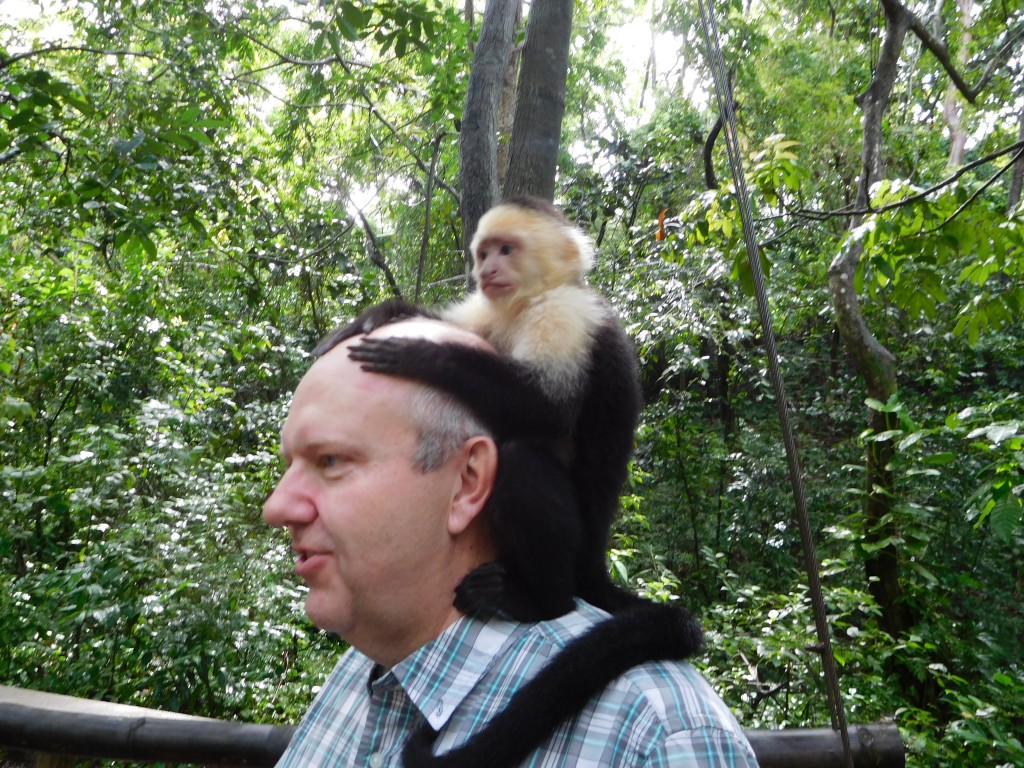 It was SO AMAZING! This monkey reached into Ryan’s pocket a couple of times, just to see if there was anything in there. So fluffy and soft, and curious. 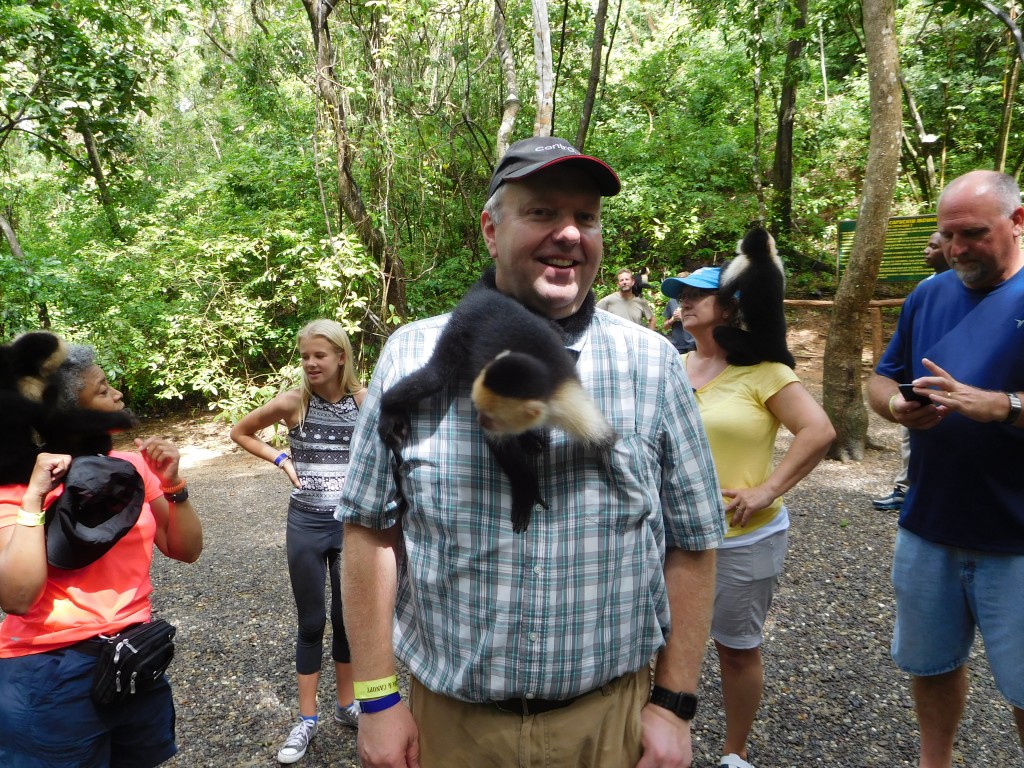 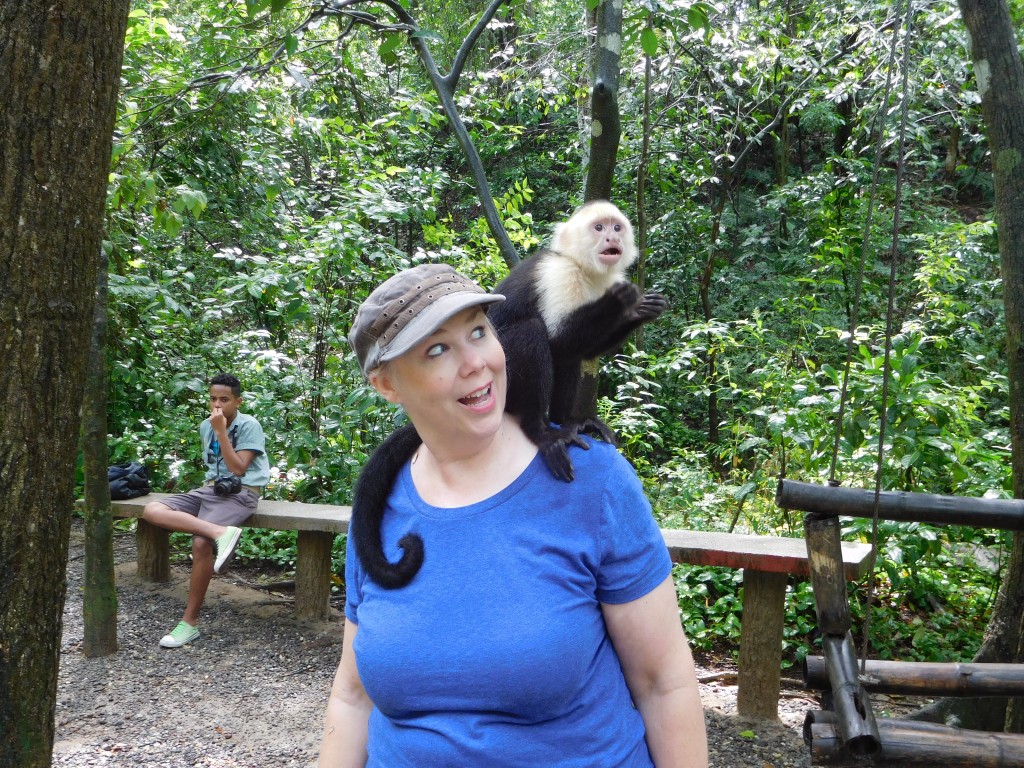 We absolutely loved the monkeys! I’m so glad a friend recommended that excursion to us. It was amazing! 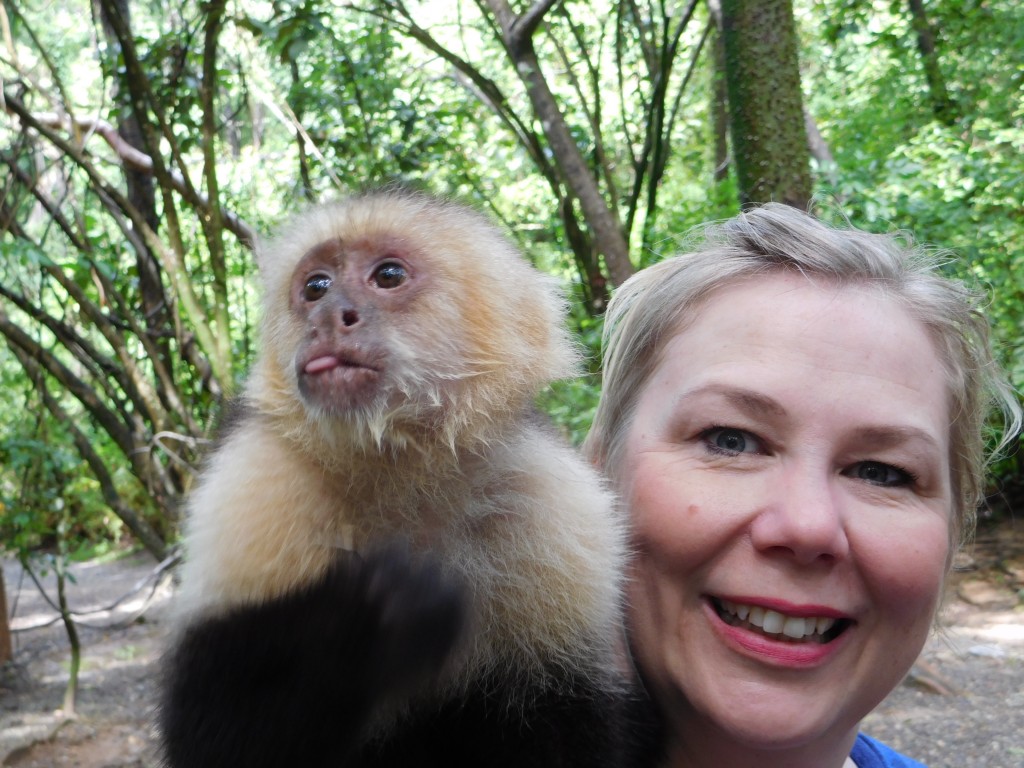 One of the fun things about a cruise is the people you meet. Of course you can’t meet EVERYONE on the cruise ship (since there are about a small city’s worth of people on the ship), but you do see certain people again and again. Of course, we mostly hung out with our dear friends Tammy and Gardner. They are the reason we went on the cruise. Tammy was one of my mission companions. Gardner was also in that mission. Later they got married. Tammy LOVES cruising, and suggested we do a mission reunion cruise. Do we mind that it was only the four or us? Not at all!

For example, we met a cute couple at breakfast one day, named Kellen and Arian. Beautiful young couple that had been married about 2 weeks. He is a farmer in Oklahoma. She is a nurse. It was fun to talk to them, and then when we saw them later on the ship, we tried hard to remember their names and say hi.

There were many people that we didn’t know their names, but their faces became familiar, since we saw them again and again. There was Viagra guy and his wife that we saw while waiting for our turn at boogie boarding, the cute couple that was sitting near us that the husband did a magic trick and pulled a 50 cent piece “out of” Tammy’s ear, the other cute couple who were concerned about me when I left dinner the night the seas were so rough, the people we tubed down the river with, Saundra and Megan who we zip lined with, the table full of cute gay guys I stopped to talk to one night and then had to ask them every day how their day was.

One group of people we met was the “Royal Caribbean Pop Choir”. On Monday on the schedule there was this pop choir listed at 2:30. I decided I was going to see what that was about. Gardner also wanted to go. So, we found the bar on the 12th deck (the Olive or Twist–what a strange name) and met Lanie and Calvin Hudson. They were both in the cast of Saturday night Fever on the ship, and in charge of this little pop choir. They teach us a song and simple dance moves, then we perform it later in the week. Sadly, we only had two rehearsals scheduled, and one of them was bumped because another group had scheduled the space. It probably wouldn’t have mattered, though, because the night we were to perform it (up on a bridge), the seas were protesting. Things were rocking and rolling so much we couldn’t really dance, just hold on. We all laughed a lot about the train wreck that was our singing of Footloose. But no matter. We had fun, and we met these fun people.

I even met my dear friends George and Brad in the Casino.