We’ve been so busy–no time to blog. Yesterday we spent a large part of the day aquiring tickets for the Late Show with David Letterman. First we stood in line to apply for the “lottery”, then they called to let us know we had tickets. So we headed back uptown to pick up the tickets. Then we had about an hour until we were supposed to be back, so we rushed to the 1/2 price ticket seller to get tickets for Dirty Rotten Scoundrels, then back to the Ed Sullivan Theater. So, we got to see Dave! It wasn’t the greatest show, I must say–I didn’t know any of the guests, the band was loud and not so great, and it was a long wait to get in–but it was David Letterman, so it was still fun. Johnny Depp was the scheduled guest, but I guess he cancelled. 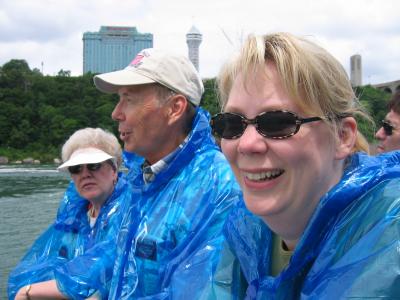 We had a wonderful day at Niagara falls. One word of advice if you ever go there—Go to the “Cave of the Winds” tour first, as they give you not only plastic bag ponchos to wear, but also lovely sandals. Had we had our sandas when we went on the “Maid of the Mist” in addition to our plasticwear, our shoes and shocks wouldn’t have been so squishy for the rest of the day. I’d love to stay and chat, but we’ve got things to do, places to go today!

We arrived here on Saturday afternoon, and after standing in line to be helped by the slowest possible rental car agent in the world, we finally made it out of the Rochester Airport. We drove to Palmyra and met up with my parents at the Smith farm Welcome center. So far, we’ve gotten “special personalized tours” of the Smith log home, the Smith frame home, the Peter Whitmer farm and the church that is now there, and a little bit of the Hill Camorah visitor’s center.

Today we’re off on a roadtrip to Niagra Falls!

I’m sitting here in the little lobby of C22. In the Airport. In Chicago. Did I mention that I don’t really enjoy flying? Well, the flying part isn’t so bad, what I really don’t like is the landing. Taking off I can hadle (sort of), and the smooth part is ok, but the landing just sucks. I get all sweaty, and my stomache jumps all over the place. Nausea sets in as I wonder if I’m going to throw up or not. And here I sit waiting to do it again.
The nice thing about the flying today is that I’m doing it without a bunch of little people to watch over, and I’m only schlepping my own carry on, not everyone else’s (still incredibly heavy!). But there’s another flight from Chicago to Rochester, and then we can start the fun.

Deep breaths. Relax. And board that plane.

–Take 3 kids to grandma’s (done)
–Take 2 birds to the neighbor’s house (done)
–Feed other friends’ birds while they are out of town for the last time (they come home tonight)
–Take 2 more kids to cousins’ house (soon)
–Return the Lost season 1 DVDs to my friend Sherry
–Take the summer fun calendar that I put together to friend Kimberly to copy and distribute
–Get insane amounts of cash out of the bank for taxis and food and everything else
–Pack the father’s day present for my Dad (done)
–Get a book that I think will keep me occupied for the flight (that entails starting about 3 books until I find one that I think is a winner, and then packing a back up book just in case–it’s a long time flying, and for once in my life I won’t have any children on my lap or beside me to entertain and keep from crying)
–Take all the sheets off the beds so the mattresses can “air”
–Clean the house (like that’s going to happen!)
–make sure there is no laundry either in the dryer or in the washer–that could be very very bad
–and, oh yeah–prepare to have FUN!

Some of you may have been wondering about the Hippy Vanagan that was parked at my house for several days this month. No, we aren’t crazy hippies, (not that there’s anything wrong with that) we just had friends visiting. But here’s a picture so you can get the full effect.

I call this one–Cotton Candy Mouth. This was taken at Ryan’s Company party. Unlimited cotton candy and snowcones–Wow!

While driving along doing my errands yesterday, a song came on the radio that I just HAD to sing to.

What you know is true.

Don’t have to tell you,

I love your precious heart.

And they could never tear us apart.

(then comes the cool drum part, you know? I really love that song)

Can you picture it in your mind? It just seems I MUST sing out loud to that INXS song. That got me thinking of other songs that just make me want to sing along. I made a little list, which follows:

**My Sherona (you know you sing along to that one, too, don’t you? Just the M-m-m-my Sherona part, though. I don’t know the words to the rest of the song)
**I am a rock, I am an Island
**Big Yellow Taxi
**Baby, I love you (by Martina McBride)
**Don’t go Breakin my Heart
**Crocodile Rock (good old Elton John)
**You’re Beautiful (James Blunt)
**You’ve had a bad day
**Hey, Hey, Hey (Ryan Shupe)
**Don’t know why (Nora Jones)

So, what do you sing along to?

The table is finished

The table is finished. Done. Well, that is, unless I decide to put another couple of coats of varnish on it, which I probably will, but for now–finished. And, in case you were wondering what it looks like now that it’s red, here’s a picture:

Try to ignore all the crap that is on all the kitchen counters and focus only on the pretty red table (and the cute fruit basket centerpiece that I fortuitously found at a garage sale for $2).

I’m happy with the way it turned out! I varnished yesterday and had the whole house smelling of varnish–ick. I put the birds outside for some fresh non-varnish infused-air, and I’m sure they’re thanking me for that.

Well, if I was ever in the running for Mom of the Year, yesterday knocked me out of the running. I may now be up for worst mom of the year. I think if I keep it up, I could be a contender! (It’s good to have goals, I think.)

What did I do that was so bad? Well, first of all, I made my kids work. Yep–work. I asked the three of them that were home and of working age (that would be 5 and up in our house) to pull ALL the weeds in the playground area. Now, the playground area does have weed shield and playground bark covering the ground, but some of those nasty weeds just feel the need to sprout and grown IN the bark. I don’t know why, since we have so many many other dirt or grass covered surfaces for them to grow in–but I digress. It’s really really easy to pull the weeds from the bark, since they can’t establish deep roots. It’s just a matter of leaning over and pulling them out. With the three of them out there, I estimate it should have taken them 1/2 an hour to do the whole area.

Well, after 1/2 an hour, they were out there lounging on the tire swing or cowering under the meager shade of the slide platform. Yes, it was hot, but it was only 9:00 am when they started, so they really couldn’t complain that much. Two of the children are soon inside whining about the work ethic of the other child, complaining that it’s hot, that “she pushed me”–whatever! So, I herded them back outside, shouted at them to get off their BEHINDS and start weeding. After I finished loading another pile of laundry, I went out again to demonstrate how easy it was to pull the weeds (part of their evil plan–get Mom to “show” them how to do it, then finish the job herself) and told them in a not so nice voice that they would be outside until the job was done. None of them could come inside until they were all finished. I went on to explain that they would be coming inside for absolutely no reason–if they were thirsty, they could fill their water bottles from the faucet. If they were out here at lunchtime they would get no lunch. If they were out here at dinner time they would get no dinner. If they were out here at bedtime they would sleep outside. Yes, I know it was overexaggerating the length of the job and the amount of their laziness, but I was sick of their whining and laziness, darn-it!

I went inside, started Tarzan for the little one (lucky child–not old enough to weed) and locked all the doors.

Yes, I’m a bad mother, I know it. I admit it. I was only trying to teach them to WORK and not drag the dumb job out for the ENTIRE day.

At around 11:30, when they had only a handful of weeds left to pull, I tried to redeem myself with popsicles. I took the popsicles outside and held them until they were done, hoping the speed of the weed pulling would be faster than the speed of the melting popsicles. And they did it! They finally got the last few and were able to have the reward (and I let them back in the house).

Throughout the day, there were various other flare ups and some shouting on my part about finding a certain library item. I’m not proud of my behavior, and I’m not trying to justify it–just telling it like it is. By the time we got home from our “outing”, which included:
–taking care of a friend’s birds
–going to the Library (where I complained a little bit too loudly that my kids couldn’t get their own library cards because we dont’ live within the city. I have to PAY $70 for my library card AND my kids aren’t allowed to have thier own library cards? How fair is that?!)
–going to Target to get a new size 4 soccer ball for miss soccer who had a special soccer camp this week and couldn’t possibly use any of the soccer balls we have at home because they aren’t size 4
–going to the bank to cash a few checks and get a large amount of ones and fives so I could pay the kids for their grades ($1 an A) and allowance (for doing such jobs as the weeding–back to the weeds, are we?)

I was about ready to drive off a cliff with myself and the children in the van. Thankfully I restrained my suicidal urges and brought the menagerie inside and gave them fruit snacks.