Because of my commitment to Bells on Temple Square and family and church callings, I can only usually do one show per year, with some years that I don’t get to do any shows at all. This year, I REALLY wanted to do a show. Since retiring from Bells was such a loss, I needed something to help fill that void. But which show?

Last year I did my first show with Lehi Arts. Seussical was so much fun, and I loved the experience. I heard them mention that next year they would be doing The Hunchback of Notre Dame. Wow, I thought. That’s could be fun. Fast forward to spring of this year. I kept an eye on the audition announcements and there were several shows I wanted to try for. Alpine was going to be doing Joseph and the Amazing Technicolor dream coat, and I LOVE that show, so that was #1 on my list, even though I knew that I would only be a chorus member of villager. My summer schedule was still pretty full, as I had a bells concert in June, then a trip to New Mexico also in June, and we are going on a cruise in August. So, whatever show I did had to fit within those parameters. That narrowed it down a lot, and I was planning on auditioning for Joseph. However, I saw on the Lehi Arts website that the dates for the Hunchback show were being changed to earlier in July, and auditions would be in April. It now fit into my timeline, and I sent in an audition video (because auditions were nights I already had rehearsal).

I was not called back, but when I looked at the call back list, I was BLOWN AWAY. So many names of so many amazingly talented people! I knew so many of them from other shows and was instantly impressed with the quality of the cast. I was kind of shocked when I read my name on the cast list, but there it was as a member of the choir. At our first cast meeting, I met the directors and the cast, and was impressed. I hated to turn in my paper of the dates I needed off in May and June, and hoped they wouldn’t just boot me out for lack of availability. But they did mention that they understood if we had a few conflicts, but in July, they would OWN our lives. Good. In July I was available. While at that first cast meeting that night, my sweet grandbaby was born. So maybe that’s a good sign.

We started out learning the music, which is VERY difficult, with tons of part divisions, AND it’s mostly in Latin. And there is SO much of it for the ensemble to sing. Sweet. I bought the soundtrack and started listening to it ALL the time, trying to learn these hard songs. And did I mention extremely high? I chose to sing alto because the soprano part was so dang high, and they needed altos.

June came, and my last concert with Bells was wonderful, and terrible. Wonderful because it’s probably the best concert we’ve done to date, and terrible because it was my last. We had a retirement “party” where they presented me my plaque for serving for 10 years, and I got lots of pictures, and cried. At the concert, my dear friends were there offering hugs and commiserations that they would miss me, and I just couldn’t even talk about it, because I knew I would be crying, and it’s hard to play effectively with tears running down the face. But the world did not stop turning, and I’m trudging forward. About that time, I got a message from the director asking me if I’d like to play a saint in the show, because several people had dropped out. Absolutely, I would! I didn’t really know what the saints would be doing, but I knew they were the statues that are around, and that they sing. I had just been learning my ensemble blocking for Topsy Turvey, but I would gladly trade that part to be a saint.

In this show, the saints do a lot of standing really still. And then sing–while standing still. There is NO dancing, hardly any blocking, a lot of standing. SWEET! I learned that standing perfectly still is a lot harder than it sounds. But learning the new songs and a few lines was awesome, and the show was coming along.

In July, we moved the rehearsals from inside the air conditioned arts center to the hot parking lot. Yes, we rehearse in a parking lot. Because that’s where there is space to build the amazing set. 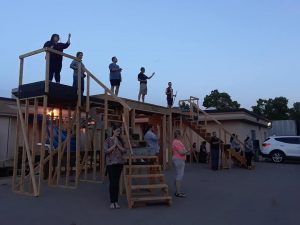 We also participated in the Lehi parades to create interest in coming to the show. 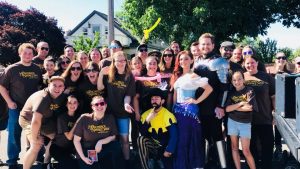 The cast was coming together! The saints were all told to choose an actual saint that is really on the cathedral at Notre Dame. Since most of the saints had already chosen their people, I choose St. Clotilde. 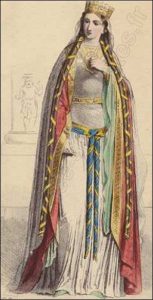 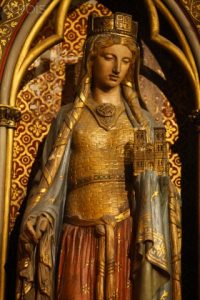 I liked her long braids, and it’s been fun to try to emulate her.

But this show, this story, has meant so much more to me than just a play. The message of acceptance has been taken to heart by ALL the cast. There are no divas (even though these people are CRAZY AMAZING TALENTED), no drama, no exclusions. It’s beautiful. Quasimodo is someone I’ve come to love and care for, and I am heartbroken over his sadness. It’s been a way to heal my broken parts, and remind me that life goes on. I’m so thankful for everyone involved in this show. They have poured their whole hearts and energy into making this a project to be proud of. 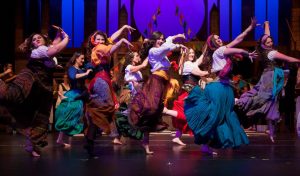 Our Director, Colleen, said it perfectly.
“It is in fact, the most beautiful show we’ve ever produced. The cast is perfection in every way. They have all changed me in some way or another. There were more than a few times I was uncertain of our vision, preparedness, and felt very out of shape directorial wise. We had a handful of core players who believed in us and actively worked to keep the cast confident in us. To our cast, thank you for trusting us.
I love this story. It is more dramatic than the cartoon, but completely relevant to our day. Sometimes our exactness in a belief system creates harshness, piety, and an inability to truly hear and see others who do not share our beliefs. Feeling as though you are an outcast can be the loneliest feeling there is. Seeing people for who they are and loving them perfectly is the most important lesson from this show, and the greatest lesson ever taught by Christ. I am grateful to have been trusted with sharing it in our community. It has changed me. I hope you can see it, it will change you too.” 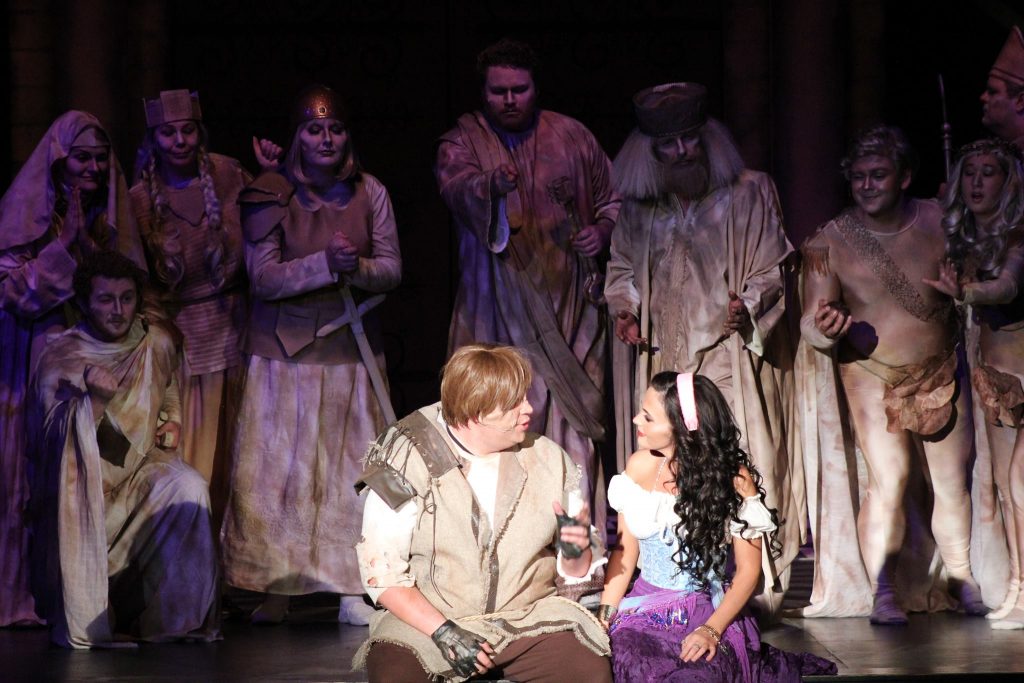 Thank you, my hunchback friends.