As I prepared myself for my retirement from the Bells on Temple Square, I decided that I would like to start a community bell choir of my own. I asked the Highland City Arts Council if that was something I could do under their umbrella, and my contact agreed. I had already been doing a teen chimes group at the arts center building, so this would just replace that. My optimism was bright and shiny as I started writing grants and requests for donations. My friend on the arts council assured me that she would help me apply for funding, and that they had received several grants, and in fact had recently purchased a $30,000 piano with grant money. Wow!

After applying to over 50 businesses, and spending SO many hours writing grants and filling out paperwork, I was just done. All I got back were NO’s, or just no response at all. I came to the conclusion that I suck at grant writing, and that no one believes in or wants to support this project. But I was still determined, so I decided to just beg for money from regular people. I set up a crowd funding project and really just got to begging. Even though I did get about $1000 from friends, it was a bit humiliating to beg, and of course, I took it personally, and instead of just realizing that not everyone has money to give to support my dreams, I internalized it that people don’t like or support me. I KNOW that’s not the case, but discouragement is a tricky tool of the adversary, and if he can get me to doubt my worth in any way, he will certainly do that. I’m working on not taking rejection so personally, but it’s a process.

I did receive word that Wal-mart would donate $500. Hooray! With the money I had raised, along with money from teaching my chime choir last year, I started looking for used bells, since brand new is out of the question. I found a 2 octave set of Malmark bells on ebay that was at around $3000. There was 30 minutes left in the auction, and I quickly looked at the pictures, and just started bidding. Reckless. I was very nervous, but kept on bidding until the very last minute, and I ended up winning that auction with a bid for $3450. Then I got really nervous. What if they were in terrible shape? What if I had just wasted ALL my money? I beat myself up mentally for taking such a risk, while at the same time, I was nervously excited that I had taken the leap and made a purchase! When the bells arrived, they seemed to be in good working order. I started polishing, and was pleased that my money hadn’t been totally wasted. I did have a professional look at one of the bells, and he agreed that they were in good shape. I have discovered that two of the handles are wrong, and one of bells has already needed repair ($70), but I am relieved that they are playable and sound good.

Soon after, I found another box of bells on ebay and I bought those, as well. 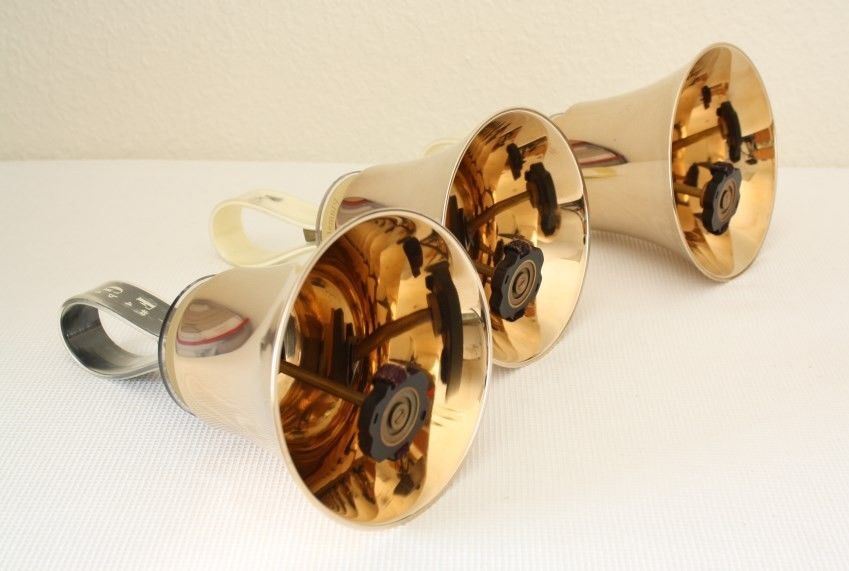 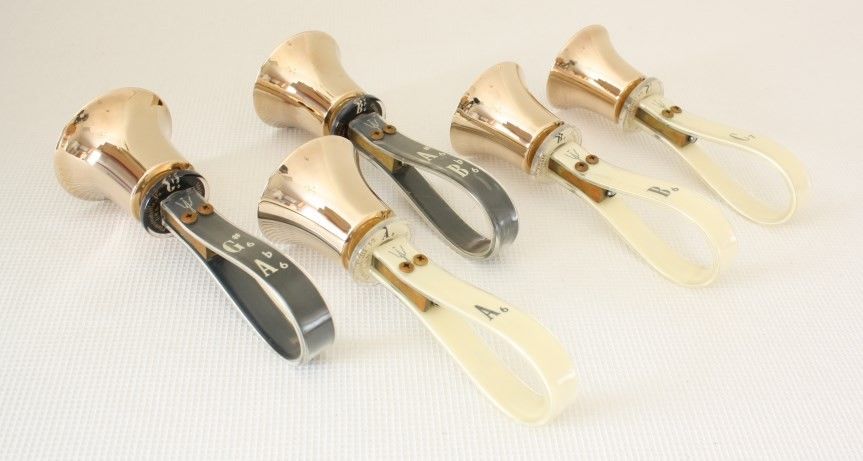 So we are now 4 bells short of 3 octaves. Unfortunately, they are the c4,c#4,d4, and d#4, and they are around $500 each. I also haven’t seen any of these bells on ebay, so I’m not very optimistic about finding them used. So, I haven’t forked out the $2000 to buy them. I did receive another $500 in donation from Rocky Mt. Power, so that’s encouraging, but not it’s not enough to justify buying those 4 bells yet.

Sadly, there is much more to starting a bell choir than just acquiring the bells. I realized I needed foam pads, and foam pad covers. That was another $200 and a week of my life spent measuring and sewing the muslin covers for the foam I had bought. I started advertising in on the Highland Arts Council website that we were forming a new handbell choir. I decided on a name and made a facebook page for the Timpanogos Ringers. I started talking up this choir and inviting people to come and “audition”. I had met some people in the play I was doing, “Hunchback of Notre Dame”, who expressed interest in trying handbells, and a few people that I know also seemed interested. I started getting emails asking about the choir, and I had a list of about 10 people who had said they were going to come and try handbells. Things were starting to come together.

The beginning of September came, and I was excited to get started. However, only 4 people came to the first week.
Recruit, recruit!
The next week a couple more people came, but some of the first ones didn’t come. I emailed all the people who had been interested, and I heard back reasons why they couldn’t commit to a once a week activity at this time. It seems that my enthusiasm for something is not enough to compel others to commit. My Wednesday nights were not looked forward to with enthusiasm, but with dread. Discouragement raised it’s ugly head, and I thought about just giving up. Directing a choir is SO different than just showing up each week to play. A friend said to me, “why are you doing this? If it’s for you, and it’s not bringing you joy, then maybe it’s not worth it. If it’s for the community, then it’s a service you are doing.” Another friend said, “you could quit, but you aren’t a quitter, are you?” I wasn’t to the point of quitting, because I had 4 dedicated members who were excited about bells. One of them even asked if he could arrange a song for bells from a piano piece and if we could play it! I couldn’t give up yet. But I did tell myself that I only had to do this until Christmas, and then if I didn’t have enough interest, I would take a break for a while.

I came home and told my family that I needed their support. I needed 2 or 3 more people to come to bells and play bells, because I can’t direct AND play, even though I’d much rather play than direct. I also asked my sister if she would be willing to try. That night, Ryan came, Amy came, and Jenna and her friend Ryan came. It was awesome (even though I didn’t have enough bells for that many people)! Ryan and Amy actually had fun and have agreed to keep coming. Yay! And Ryan helps me carry the bell boxes to the car and back into the house each week, so that’s also a bonus.

We now have 9 ringers, which is perfect! If all of them would just keep coming every week, that would be great! They sight read very well, they are all good musicians who understand counting and notes because they have all had music lessons of some kind (even if they were kids, it helps!). I do not dread Wednesday nights! I’m having fun, and I think that they are having fun. I took a week off the week of fall break because I wanted to attend the wedding reception of a dear friend, and we are taking off Halloween. But I’ve scheduled us for a concert on December 12 at the community center, plus a couple of parties and the festival of trees. We will not be perfect, but I hope that everyone has fun. I’m hoping to get 9-10 songs ready, but if we don’t have that many songs ready, that’s ok, too.

I will still look for funding options so that we can get those bells we need, but it’s not urgent. I feel like my efforts of the past 10 months are finally starting to pay off and this crazy venture of mine might actually work. Will it replace the choir I’ve loved for the last decade? No. But this will allow me to express my love of bells and music in a new way, while hopefully instilling that love with new people. I hope that as we perform this Christmas and into next year, we will become more confident, and ready for new challenges. I also hope that we will grow as friends in the group and that it can be a safe and happy place for all who come, and that we can have joy in making music.