No one wants to be that person.
SPECIAL DIETARY NEEDS
It makes me think of that ONE runny nosed, scrawny kid in elementary school who has to sit by himself at the lunch table with his soy milk and non peanut butter sandwich. Or that snooty lady at the restaurant who insists on asking the waitress over and over, is this gluten free?

There was an Elder in my mission in Germany that had all kinds of dietary needs. The members didn’t like inviting him over because they didn’t know what to fix for him. I heard rumors that they would just give him boiled potatoes and meat. I feel so sorry for him. You know what they do very well in Germany? BREAD. Brotchen. Hard rolls. Schwartzbrot. And those delicious sauces! Yum. You know those aren’t gluten free.

They say pregnancy messes with your body. If there was some issue lying dormant…BOOM. It comes out in pregnancy. Mine was this rash. The doctors said it was pregnancy related, so I thought it would go away when I wasn’t pregnant anymore. Not so. So after my second baby was born and I couldn’t stand the itching and the pain, I went to a dermatologist who took biopsies of my skin and declared that I was a celiac and could not eat gluten.

It was like a death sentence. Not eat bread? Or Pasta? Or baked goods? ARE YOU KIDDING ME?

Needless to say, living gluten free is not a death sentence. It’s an annoyance. There are so many gluten free options, now, and with all the people doing low carb, it’s not even that weird to ask for a hamburger with no bun anymore. Some may even say Gluten free is ‘trendy’. But don’t get me started on which restaurants really stink at the gluten free burger (McDonalds–shredded lettuce with a plain patty on top of it? You call that a lettuce wrap?)

But that being said, parties are hard. I usually wander around the potluck table and think, well, if I pick out the good stuff from that, I could maybe eat it. I could peel off the cheese layer from that pizza, but that’s way too much gluten contamination. Cookies? Out. Cake? Out. Is there a fruit or a vegetable that’s plain? A burger? 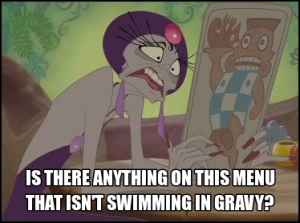 Gluten free has come a LONG way in the past 20 years. Menus are marked with the gluten free symbol. Waiters don’t look at you SO much in annoyance when you ask if something is gluten free, or if you can have your burger with no bun. There are better breads and cookies, and you don’t have to go to the health food store to buy them. I can get frozen waffles, pizza crust, even cookies and muffins at my local grocery store. But it’s still more expensive and not as tasty. Let’s me honest.

I had a while there that my symptoms went away after my last child was born, so I went back to eating whatever. But about a year and a half ago, the rash came back, and now it’s non-negotiable. If I eat that half of a cookie, I will suffer. By tomorrow, I will have an exema like rash on my eyelids and face, itchy crap on the elbows, painful water blisters on my butt or knees.

The worst is when people bring treats. On Sunday, our neighbor brought over a plate of homemade chocolate chip cookies. That’s so sweet. But it’s not so sweet for me. Because I have no willpower, so when everyone else is eating a cookie (or 5), I ate half a cookie. And there are consequences. Ugh. Excema like rash on my eyelids, painful water blisters on my butt, itchy scabby rash on my elbows. All of it.

I even had a gluten free cookie left in the fridge, but it wasn’t that great, so I ate the homemade cookie. Silly Paige.