Christmas this year has been wonderful! I loved the concerts, the decorations, the music, the shopping, the wrapping, the gingerbread house making, the anticipation, the live nativity, visiting Santa. All of it. Seriously. I asked the kids if it would be ok if we didn’t have Christmas on Sunday but waited a few days just to keep the magic going, but they didn’t go for that.

For months I had been planning on an early Christmas morning trip to the Conference Center for Music and the Spoken Word. I planned on dragging my family along. But about two weeks before Christmas, I got the message that they were going to record that on Thursday night, instead of having everyone come for a live Christmas broadcast. Hooray! It was wonderful to be there with the choir, especially when they did the Hallelujah Chorus. It’s one thing to hear it on a recording, but to be there, live, and to be sitting up on stage with the orchestra and the choir is behind you…that’s a once in a life time experience.

Saturday we began our celebrating. 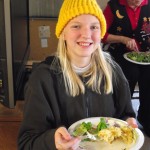 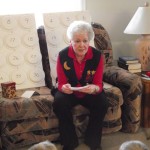 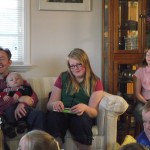 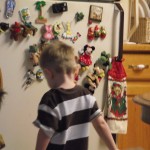 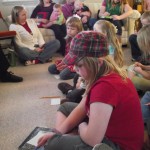 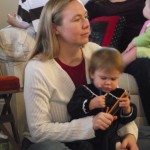 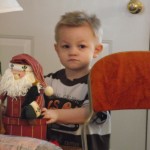 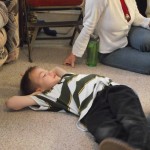 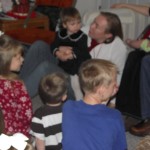 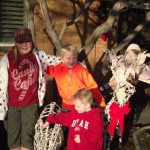 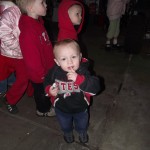 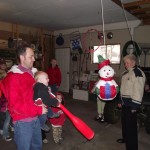 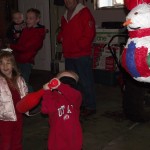 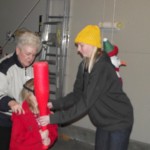 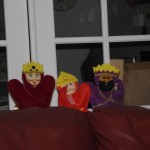 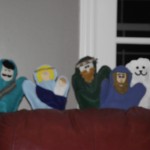 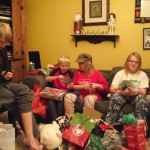 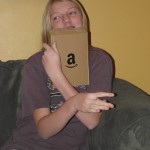 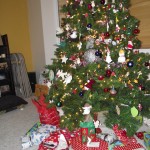 We had our Coleman family Christmas party at Grandma and Grandpa’s house, and all but my brother and his family were there. As you can tell, it’s a big crowd, with 21 grandkids in attendance. We had wonderful food, then Grandma did some games, ending with a pinata in the garage. Instead of gifts, each of the kids and grandkids got an envelope with some cash in it (the kids were excited that it wasn’t just regular money, but the cash was in $2 bills, which is even MORE special!) Yes, it’s chaotic, but it was a wonderful party with my family.

We came home before too late, and we had time to watch Mr. Kruger’s Christmas, and tell the story of Jesus’ birth and act out the nativity with our puppets. The kids eventually went to bed, and soon Ryan and I were in bed, too. We had agreed on “no earlier than 7 am” for a wake-up time.

It was the usual excitement and flurry of present opening. The family was excited to receive a Kinnect for the x-box from Santa, and quite a few movies. Cole got an MP3 player that he had wanted, Jenna and John got games for the Nintendo DS, Natalie a new coat, and Megan got a Kindle. I gave Ryan some clothes and a remote control helicopter. He surprised and spoiled me with a new Kindle Fire. I kept saying that it was too expensive and I didn’t need it, but he told me to just be quiet and enjoy it. Our church isn’t until 1:00, so we had time to watch the Music and the Spoken Word, play with some of the new stuff, eat a nice breakfast, and then get ready for church. Our sacrament meeting was really lovely. The choir sang, the primary sang, there was a beautiful musical number, and two great speakers. And there were no other meetings!
Nice.
After dinner, my parents came over to play some games. For the past several years, we’ve invited both sets of Grandparents over for dinner and games on Christmas eve, but since we ended up doing the family party on Christmas eve, we opted for a last minute invite. It was fun to have them come over, and we learned a new game. Ryan even made the treats (cheeseball and Brazilian cheesbread). So, that was a fun way to end the evening.

Monday came, and the partying continued. The Ericksons had planned their family Christmas party for the day after Christmas, as that’s when we could get everyone together. We decided to get everyone together earlier in the day to take a big family picture. The last one we took was when John was a baby and my other kids looked about like this.

Oh, they were so cute, I want to just EAT THEM UP!

I looked just a bit younger, then, too. Sigh.
Anyway, I had suggested the photographer who had done our recent family photo shoot, Julie Taggert. She did such a great job making us look good, that I thought she could handle the challenge of our large extended family. And a challenge it was. One of Ryan’s nephews was hospitalized recently with pancreatitis, and he is still not back to full strength. He’s also got a feeding tube that we want photoshopped out, but she said she could do it. Getting 40 people to show up all at the same time in the same place and looking nice is also a challenge. I worried that it would be too cold, or raining or snowing, but the day was nice, bright, and above freezing. I wish I had thought to bring my camera with me to the shoot and the party, but I left it at home. I’ll have to wait for the official pictures. Megan woke up that day feeling crummy, with sneezing and runny nose galore. I tried to make her up a little bit, but she was stuck with a red nose and a bad attitude. Hopefully Julie can photo shop THAT, too. It only took about one hour to get all the shots we needed, and then we were on to Julene’s house to party. We took Megan home first, as she wasn’t feeling up to a party, sadly. We ate and ate and ate, had a small white elephant game present exchange, and Grandma and Grandpa gave everyone their presents. I was excited about the Ninja blender and chopper Ryan’s parents gave us, in fact I’ve make smoothies two days in a row now. Today’s was even a GREEN smootie. Yum.

Now all the parties are over, and it’s time to start taking the decorations down. At least some of them. It was a wonderful Christmas. We have spent a lot of time together as a family, and made some precious memories. The kids seem happy with their presents.

I hope you also had a wonderful Christmas, and that we can welcome in a bright new year.