Here’s to many more years together

It’s our Anniversary today. August 18th. We have been married 21 years! Together we have five children.

This week will be our 15th “First” day of school with our kids. That’s about 100 parent teacher conference visits and hundreds of hours of helping with homework.
We have eaten roughly 7,350 dinners together. Some were stellar, some were not so stellar. Some have been downright terrible.

We have been to approximately 1,090 sacrament meetings together. I’m of course estimating here, because some of the time Ryan is out of town, or someone is sick, or I have missed church because of bells. Some of those were before we were married.

Together we have weathered 5 job changes, 8 months of unemployment, we have built two houses, and moved 5 times. We have gone through 45 months of pregnancy.

During our marriage, we have gone through 7 cars. We started with my Mazda GLC and his 67 Galaxy, then bought our 1990 Nissan truck (which we still have). As kids came, our cars got bigger. The Camry that we bought from Vicki and Chuck, then the 1998 Dodge Caravan Van that we later passed on to my sister and her family. Then we got a 2003 Suburban, and finally our “new” car, the 2011(? I think) Kia. (We do also insure an 88 Camry that was gifted us by the grandparents, but we don’t ever drive it, so I hardly count it as OUR car. It’s more of THE KIDS’ car). With those cars came many frustrations and car repairs, but no accidents to speak of.

We have hosted 11 exchange students from four different countries.

We have sent one missionary out. He’s been out almost 3 months now.

We are not perfect, neither one of us, but we are determined. Ryan has been supportive of me through emotional outbursts, angry spats, times of overwhelming stress, and patient with me even when I am determined to follow through with some crazy or wonderful idea. I have tried to also be supportive of him with his work demands, oft times frequent traveling, his wiring and rewiring of the house, the abundance of gadgets and all that is Ryan.

We like to have a good time, and have hosted hundreds of barbeques and parties. 71 birthdays for the just the kids! He has been supportive of me in my many hobbies and endeavors, which include 6 plays, 7 Christmas concerts with the Mormon Tabernacle Choir, 17 concerts of the Bells on Temple Square, and one year so far of teaching the elementary chime choir at school. Of course, I have also taken him on many different trips that I have won, including several with the family to Disneyland, San Diego, Mesa Verde, and two trips for just the two of us to Cancun and New York City.

I can’t imagine spending my life with anyone else.

We aren’t real consistent on Anniversary gifts. One year we both got each other watches. We usually try to have a get away or even just a date to celebrate. This year things are quite hectic, as he’s been out of town this week, and I’ve had to do 4 shows this week, so there wasn’t much celebrating going on, but, I came home late last night after our closing night at the Scera to find he had bought me roses and scissors. The roses are so pretty and so sweet, but the scissors are an even nicer gift. Seriously. I was rifling through a drawer on Saturday complaining that we had lost or broken all of our scissors, and I had none. He heard my complaints, and bought a 3-pack of scissors for me. I guess the gift for 21 years is scissors. 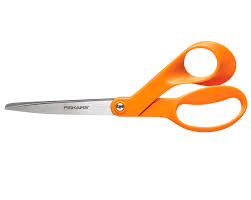 I am forever grateful that he loved me enough to be patient while I fell in love with him, and he’s been patient with me from then on. Thank you, Ryan, for sharing these years with me. Here’s to many, many more years together.