Seeing everyone’s “Me, Too” posts is making me sad and shocked. If you don’t know what that is, it started when Alyssa Milano tweeted “if all the women who have been sexually harassed or assaulted wrote “Me too” as a status, we might give people a sense of the magnitude of the problem.” You can read more here.

I thought through my life and I can’t really say that I have been sexually harassed or assaulted, but then my mind went back to middle school. Oh, the dreaded middle school. Where girls are just starting to experience menstruation and the boys are crude, rude, and crass. When it was “that time of the month”, I lived in fear that my pad would leak and I’d have blood on my pants. After sitting at a desk for 45 minutes or longer, when you stand up, it pretty much feels like a gush of liquid and I was always terrified there would be an accident. Feminine protection has come a long way in 30 years, so I hope that girls don’t have that same terror. If you saw girls with sweatshirts or sweaters tied around their waist, that wasn’t always just a fashion statement. Boys were stupid, and if a girl said something that they perceived as snarky, comments like, “Oh, she’s on the rag,” or similar crass remarks abounded.

The worst experiences were in shop class. Yes, I took metal shop with two of my friends. I think there were 5 girls in that class. Some of my friends loved it. I did not. The boys in that class were jocks and jerks, and none of them friends of mine. It was hard for me to speak up and get a turn using the welder or other tools because the boys just scared me. There was constant talk of sex and lude remarks. I don’t know where the shop teacher was. I tried to laugh it off, but inside I felt like curling up into a ball. Someone started singing, “Come on baby, light my fire,” when they needed a light for a torch or a welder (which seemed to be all the time). I still hate that song. And heaven forbid if I WERE on my period and had to go to shop class. Every comment made me cringe and shirk and feel dirty and helpless.

Was I overreacting? Harmless talk? Maybe. But it wasn’t a locker room, it was a class room, and it was not a safe place for me. I passed that class, but with a C. Because I could never get time on the welder (because I was afraid and intimidated) I ended up making a bunch of twisted wire trees, similar to these. 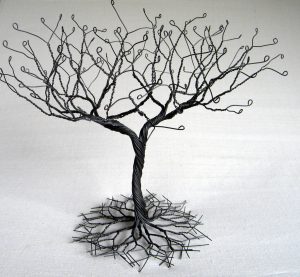 Women and girls should not have to feel shame because their bodies are performing their functions. Yes, we have ovaries. And Fallopian tubes. Wake up.

Contrast this to right after my mission. I was SO much in missionary mode, but I needed a job, so I signed up with a temp agency. I was sent to work at a cabinet manufacturing facility. I would write labels for the cabinet orders. I don’t know why they didn’t have a computer to do that, but there I was, with a bunch of cabinet makers. I didn’t know anyone, and when in the break room for lunch, there was a lot of foul language. One guy threw around f bombs and other such gems a LOT. I did my best to ignore, but didn’t say anything. I probably cringed, though. I don’t know. After a couple of days, something nasty came out of his mouth, but then he looked at me, and said, “Sorry, I’m trying to quit.” I hadn’t mentioned that his language was offensive to me, but he noticed, and tried to do better when I was around.

I don’t want to minimize other’s experiences with my own, just notice that sexual harassment is prevalent everywhere.

It’s hard to have faith that the Me Too campaign, or something like the #WomenBoycottTwitter movement will make a difference. But maybe they are two very small steps towards a more just future for victims.

If you are a victim of sexual assault, you can visit RAINN or call its hotline at 1-800-656-4673 to receive confidential support from a trained staff member.