Remember those chicks that we got back before Valentine’s day? Soon they were to that awkward teenage phase and looked all gawky, but in a cute kind of way. When they were about a month old, we started to take them outside for outings. We had to move them from the basement to the garage, because they were oh-so-smelly. Even then we had to change the paper in their box every single day, or we couldn’t stand the smell. They seemed to be more and more chicken like every day. Although this little girl looks very hawk like, doesn’t she?

Once they were about 6 weeks old, I started taking them outside and letting them stay in the outside coop during the day. But then I had to put the bigger chickens in a different pen to keep them from picking on the mini chickens. So that involved me carrying all the little chickens outside to the coop, moving the big girls to the run, etc. Then if it got too cold, I had to move everyone back. Spoiled much? Yes. They are. When we went on vacation, I spent a good deal of time worrying about the best way to house all of my chickens. If I move the big chickens out of their pink coop, then they could use the old crappy red coop with the attached run. The pink coop is a little bit more protected and should be warmer, so I could put the little chicks in there. But what if it snowed? Would the little chicks be warm enough? I realized this is the first time I would be leaving my chickens, since we got chickens! Our last family vacation was last year before we started our great chicken project. I really don’t think I’m supposed to spend this much time and energy worrying about my little feathered friends. We did get everyone settled, although I didn’t know if my girls would lay in this other coop. They really like to lay their eggs in their OWN box in their OWN coop. Even if I moved their lay box into the other run, they wouldn’t go in there, and if they did lay an egg, I would just find it on the ground. Ugh.

Well, we DID leave them, and they made it through. Well, most of them did. We came home to find one of the little Americaunas dead in the coop. Not sure what happened because we had a girl coming to feed and water them, and they were apparently all ok the afternoon before our return. We are sad to have lost one, but I am trying to teach the kids (and myself) that these things happen with chickens, and we should be happy that four of the mini chickens and all the big girls made it.

Now my job is to acclimate the two sets of chickens. They have two side by side runs that I can put them in during the day, but I still worry about putting them all together. Look how big they are getting! Almost like real chickens! And they are starting to sound more chickenlike and less like cheeping chicks, too. The kids love them, and so do I. Even my husband, who a year ago was anti-chicken, has said how much he likes having them. Hopefully within the next few weeks we can get things settled, and no more separatism between chickens. And we’ll settle into a summer routine and get back into our egg laying.

Yes, we love our chickens.

(Ok, we’re not to this stage, but we do love them)
And I’m not dressing them up in chicken clothes. Not yet, at least. 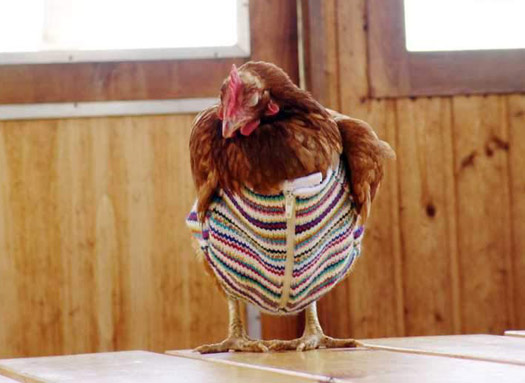 Linking to Camera Critters and Fresh From the Farm Friday>