I have been meaning to blog all about the fun convention I attended last Thursday-Sunday, but honestly, I’ve been trying to get back into the routine of life, since I was SO TIRED after the long weekend.

It was a wonderful experience. 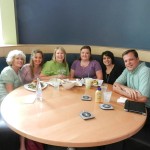 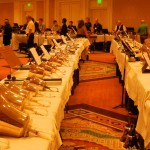 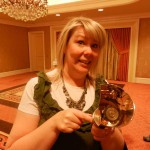 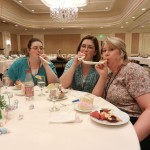 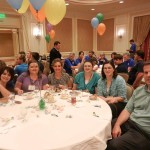 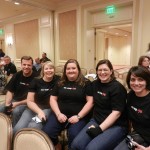 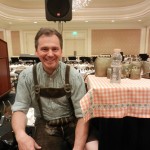 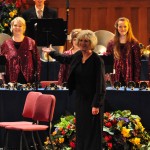 It was so much fun to be with bell people all weekend, and especially fun to be with the other four ringers from our choir who attended the convention.

We bought these shirts for our Saturday night “concert”, since all the other groups were wearing their choir shirts, and we don’t have choir shirts. They say “Eat. Sleep. Ring.” Which is really what we did all weekend. I think I rang for about 12 hours (including our Bells on Temple Square on Friday night).

We even had lunch at the Grand America Hotel on Sunday.

I wrote this note to my choir mates:
After hanging out with bell people all weekend, I feel like a rockstar. SO MANY little ringing ladies came up to Linda, Liz, Janeen, Ryan and I and asked if we were a part of THAT TEMPLE CHOIR, and then they had all kinds of wonderful things to say to us about how WONDERFUL the program was and how animated our faces were, and how much they enjoyed the concert. It’s a good thing the convention ended today because I was starting to get kind of a big head listening to their kind comments about ALL OF YOU. One lady even asked if you had to be a member to audition for the choir. I told her that, yes, you did, and told her she could move to Utah, join our church, and THEN audition for the choir.

We had a marvelous experience with the convention, and I just wanted to let you know how much they enjoyed the concert.

Paige
p.s.–My in-laws said it was the best concert they had EVER been to (not just a bell concert, but ANY concert–EVER). Of course, they are getting up in years and have probably forgotten many a concert in the past, but still–what a complement. I have to just include this picture from the concert. I love how our director is singling me out! Just kidding! She’s not gesturing ONLY to me, it just looks like it there. Makes me laugh.

One of my friends summed it up perfectly when she wrote:

It WAS a wonderful weekend. I learned so much! Yes, we did receive a lot of compliments. I spent a lot of time talking to other people about their choirs.

People were surprised that we only practice once a week and are able to ring the way we do and with the level of difficulty that we do.

One of the comments that has probably stuck with me the most was from a cute little lady I was talking to on Sunday. She was asking about my bell experience and how long I had been in BoTS. I told her I had been in our group for 7 years…”and prior to that?” “I rang in high school for three years,” I responded. She paused waiting patiently for more of a reply and then said incredulously, “THAT’S ALL!!”

We continued to talk. I told her about our audition process and she told me she had been ringing for 30 years and couldn’t imagine life without bells.

I think the greatest privilege and blessing of being part of BoTS comes from ringing for the Lord. If you think about the experience we have as bell ringers, it really pales in comparison to the majority of the bell ringing world, but because we are called and set apart as missionaries and because we are on the Lord’s errand, he has multiplied our talents and abilities exponentially in order that we can share His light and gospel. I am so grateful for all of you and for the absolute privilege it is to be part of BoTS.