A tale of survival

I did a week long substituting job this week. I survived it. But working every day? Not my thing.

But if you are subbing, the second day is SO much easier than the first day. The first day you are pretty much flying by the seat of your pants, but the second day and each day after that, you are starting to get a sense of the routine and the kids’ names. And since this job was at my kids’ school, and I knew the teacher, that made it that much easier. But the physical and mental energy that it takes to be on top of those 30 kids all day every day is enormous.

Some things I’m learning from subbing, though, include:
–Always be nice. You never know when you are going to be some kid’s teacher. I walked in on Monday morning, and one observant child said, “Do you play bells? Were you on TV yesterday?” Well, yes I was, in fact, on Music and the Spoken Word the day before. But I was surprised that he or anyone in that class would recognize me. I went in for a few minutes on Friday afternoon to get the lay of the class from the teacher, and he must have recognized me. Another time, after an especially challenging day in a Jr. High class where the teacher had already been gone for 3 days and didn’t leave nearly enough work to keep them busy, I ended up yelling at a class for their extremely rude behavior. We went out to dinner as a family that week and there was a kid in the restaurant who looked VERY familiar. I kept looking over there and thinking, “I hope he wasn’t in that class where I lost my temper.”
–Games are good. We played a spelling game called “sparkle” and the kids LOVED it. They wanted to play that every day. We also played “I have, who has”, a fun game that the teacher had. On Friday, after they had finished their reading and work, they all started to get out games from the cupboard. What are you doing? I asked. “It’s Fun Friday,” they said, as if that should explain everything. The plan I had said nothing about a fun Friday or games, but it sounded good to me, so I went with it. 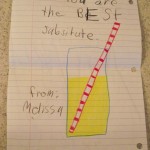 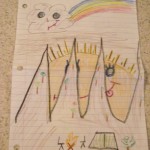 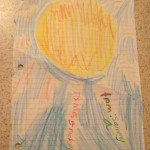 –Young girls love to draw pictures for the teacher. I love how this one says I’m the best sub. She gave me that on the first day, so I don’t know how she could think I was the best sub, but maybe their last sub was really bad.
–Everyone needs recess.
–And the library. We all love to go to the library.
–Not everyone knows how to skip. I had the kids skip back to class after having taken them to the portable for specialty. Some of them just took off charging ahead in a run. Some of them skipped REALLY fast, like it was a competition. And some kids said they couldn’t skip.

So, after the whole week, I earned a whopping 325 dollars. Really. And I was SO exhausted and my house was a wreck. I came home Friday ready to crash on the couch, and Ryan showed me a bonus check he had received that day. It was WAY more than $325. I looked at it and said, ‘What’s this check for?’ Ryan said it was his bonus. I looked at it and said, “This is probably more than I’ll make the rest of the school year. Why am I even bothering working?” Then I got a little crazy (keep in mind I was really tired from working all week) and I jumped up and down with the check and said, “I don’t have to work anymore!!!” The kids (especially the 15 year old) rolled their eyes at their crazy mom. Oh, well.

So, really, if you are going to substitute teach, hopefully you aren’t in it for the money. Because there isn’t any.

This week I have no plans on subbing. In fact, I plan to NOT sub. Because this week is CONCERT week for the Bells on Temple Square! Fun.

There is a wonderful article about the bell choir and our new director in the Deseret News. You can read it HERE if you’d like.

Since it’s concert week, that means we’ve been having Saturday rehearsals for the past few weeks, and that this week we’ll rehearse on Tuesday and Wednesday and have a concert on Friday. So I don’t really need another job, I’ve got that one, thank you very much. I’m excited about our concert. Although there’s one song that is seriously giving me wrist and elbow problems, I am pretty confident that we will do well and put on a really great concert. You should come!

A little too sweet for you?

Well, it was going to die anyway